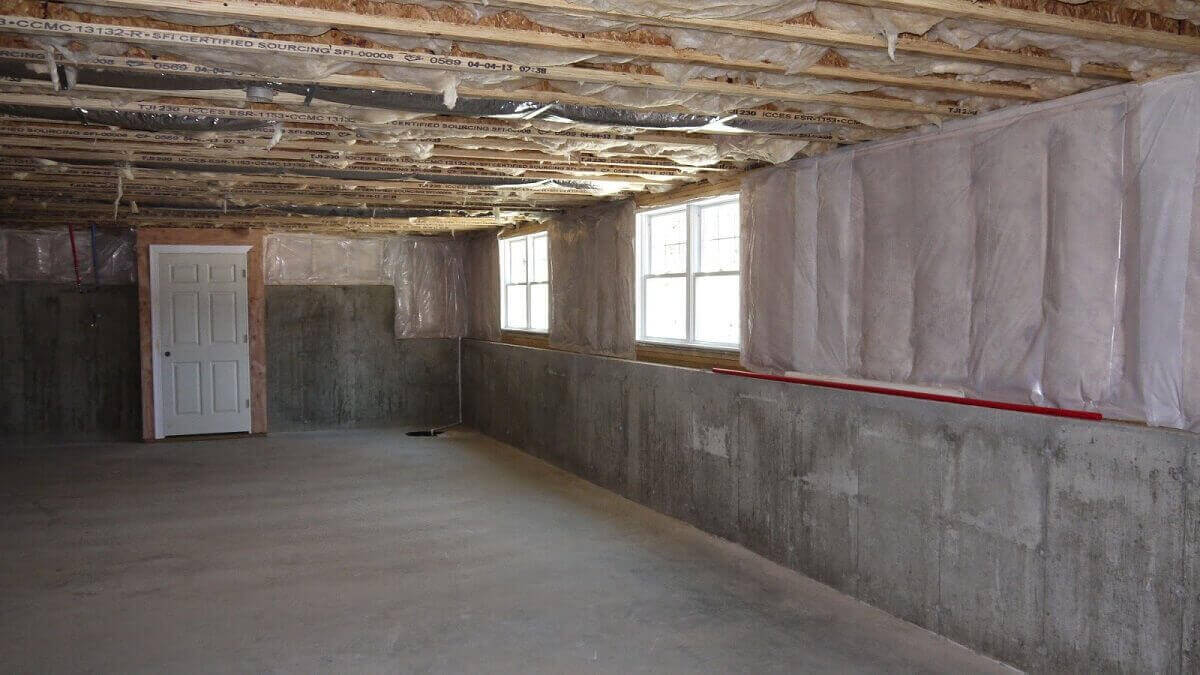 Musty basement odors never go away quickly regardless of how much you sweep, mope, or spray the room.

You may have, at some point, tried to use sprays and scented candles to remove the smell. The problem is that these can only eliminate odors temporarily.

A smelly basement can get worse with time. It can degrade your home’s structure and create many health problems like asthma and allergy attacks.

If you want to get rid of the smell in your basement, you need the best basement odor eliminator.

Some basement odor eliminators work quite well when it comes to odor elimination. Different products use different techniques to neutralize and eliminate the odor. However, there are some products that basically apply perfume over the odor. Avoid these products since the bad smell will return after a few days. 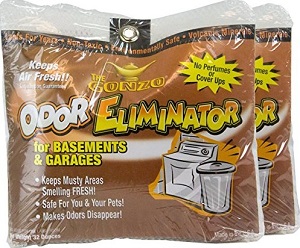 Gonzo Odor Eliminator is a non-toxic, volcanic mineral that naturally absorbs moisture and odors. The eliminator does not have cover-ups or perfumes.

Instead, it uses volcanic minerals because the rocks are environmentally safe. These rocks offer a natural alternative to other basement air fresheners. You can use the product at home around children and pets.

The advantage of Gonzo Odor Eliminator is that you can recharge it by placing the product in direct sunlight.

That means the basement odor eliminator will be ready to start absorbing unpleasant smells in your garage and basement again and you won’t need to spend on a new bag.

It will also eliminate musty odors caused by mildew and mold, garbage smells, pets, feces, and urine. Furthermore, the product will remove airborne bacterial odors and odors in cars, boats, trucks, and RVs.

You can also use it to remove cigarette and cigar odors, fireplace, and chimney odors. The eliminator will deodorize your basement, kitchen, bathrooms, closets, and other areas to get rid of musty smells.

Pros
Cons
If you are looking for an all-natural, non-toxic, and fragrance-free eliminator for your basement, Gonzo Odor Eliminator is the best choice.
Check Current Price on Amazon 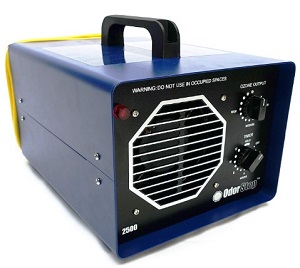 OdorStop OS2500 is a professional grade ozone generator. It helps to deodorize and sanitize medium to large spaces.

You can use the device to clean hotel suites, offices, apartments, homes, daycare centers, restrooms, condos, and basements.

The unit is ideal for eliminating severe odors caused by different substances.

These include tobacco, smoke, and fire, mold and mildew, water and flood damage, cooking and animal smells.

Pros
Cons
The OdorStop OS2500 generator is the best choice for people looking for an ozone generator to purify air and increase odor elimination in their basements.
Check Current Price on Amazon 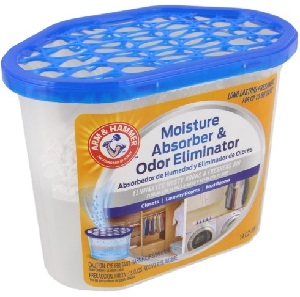 Arm & Hammer Moisture Absorber is an odor eliminator that works in a damp, smelly, and humid area to remove the excess moisture that causes musty odors.

The product is a non-electric dehumidifier that will keep a small room smelling fresh. You can use the odor eliminator in your clothes closets to remove excess moisture.

Excess moisture in your wardrobe can damage leather goods and clothes. It can also cause damp feeling fabrics and mildew spots.

Arm & Hammer Moisture Absorber & Odor Eliminator will work well in many areas in your house. These include the bathroom, basement, garage, laundry room, crawl spaces, mudroom, and storage room.

You can also use it in your car, boat, RV, and any place with a stale and musty odor. To use the product, hang it up anywhere you want to remove odor.

Pros
Cons
Arm & Hammer Moisture Absorber & Odor Eliminator is the best to use in a damp basement and garage. It will eliminate moisture in your basement and leave it smelling fresh.
Check Current Price on Amazon 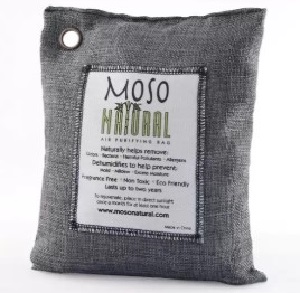 Moso Natural is definitely one of the best air purifying bags. It offers an easy and convenient way of maintaining a dry, clean, and odorless environment in your basement and garage.

The product is made of the natural bamboo charcoal which is safe to use at home. You can use the air purifying bag to absorb and remove allergens, odors, and harmful pollutants in your basement.

Furthermore, you can use the product to clean and refresh the air in your home.

As an odor neutralizer, it is an excellent natural alternative to chemical sprays, deodorizers, gels, and candles.

Pros
Cons
MOSO Natural Air Purifying Bag is the best to use in musty and damp environments. It will absorb excess moisture in these areas and prevent the formation of bacteria, mildew, and mold.
Check Current Price on Amazon 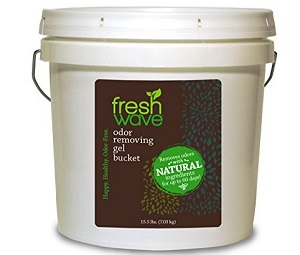 The product uses simple, natural, and pure ingredients to eliminate both inorganic and organic odors.

Instead of covering up smells with chemicals and perfumes, it eliminates odor molecules in your home.

You can use the product to remove odors from food, mildew, trash, smoke, and pets.

The gel evaporates when in use. It will disappear as it eliminates odors from a smelly basement drain. 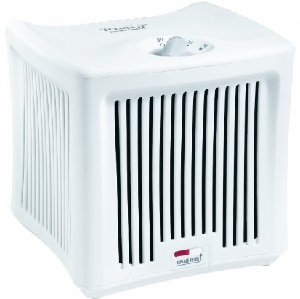 The unit has quiet fans that pull in air and neutralize odors using three carbon filters and then send fresh air back into the area.

The air cleaner does not mask smells and odors. Instead, it eliminates them.

You can use the cleaner to remove pesky kitchen and pet odors, keep bathrooms fresher, and eliminate the smell of smoke.

Pros
Cons
Hamilton Beach TrueAir Room Odor Eliminator comes with an optional scent cartridge. The cartridge helps to add some fragrance when the cleaner is purifying the air.
Check Current Price on Amazon 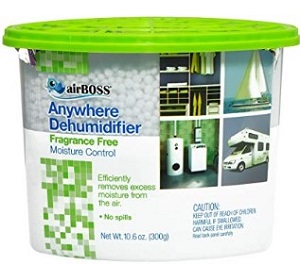 airBOSS Anywhere Dehumidifier is a product that contains activated charcoal.

It comes with drying crystals that protect items against rust, dampness, and musty odors. These odors are usually trapped in enclosed spaces and closets.

The dehumidifier is the best for small areas prone to moisture or mildew.

You can use the dehumidifier in the kitchen, bathroom, basement, closet, and storage spaces. The activated carbon in the cleaner will work against smells in small spaces.

It will trap and absorb offensive odors. After it has finished the musty basement smells, it will leave the area smelling fresh and clean.

Pros
Cons
airBOSS Anywhere Dehumidifier will pull moisture out of the air in your basement. It will last up to six months before it can’t absorb moisture anymore.
Check Current Price on Amazon

Are you wondering how I decided on these basement odor eliminators? Well, here some of the things I considered and you must consider them too:

It is not enough to clean your basement. The reality is that a buildup of dirt and dust does not cause the musty smell.

Your basement is the perfect environment for holding moisture. As such, you need to investigate further to determine the primary cause of the smell. After the discovery, you need to come up with a plan of eliminating the musty odor.

Basements are tricky because many things can cause a musty smell. These can include excessive moisture, mildew, mold, and poor ventilation.

Another cause of basement odor is water leaks. A small water leak can cause lots of humidity in the basement. You should take care of visible water leaks or stains before they damage your home’s foundation.

How to prevent basement odor

You can avoid basement odor by identifying the source of the smell. Some of the ways of doing this include:

Try to prevent moisture from accumulating in your basement. In the long run, you will avoid basement odors altogether.

How to eliminate odor from your basement

You can get rid of basement odor in many ways. These include using:

Sometimes the most effective way to eliminate basement odor is to ventilate and deodorize the basement. That means you should open up basement windows to bring in the fresh air. If your basement does not have windows or doors, install a fan to increase air circulation.

If these do not work, you need to buy the best basement odor eliminator.

Hopefully, this guide has enabled you to find the best basement odor eliminator for your home. The listed eliminators will dehumidify the air in your basement and absorb odors.

You have many options when it comes to a dehumidifier or odor eliminator. You can either buy an electric or non-electric one. Regardless, ensure the odor eliminator is safe to use at home. Prices of the listed cleaners range from $18 to over $100.