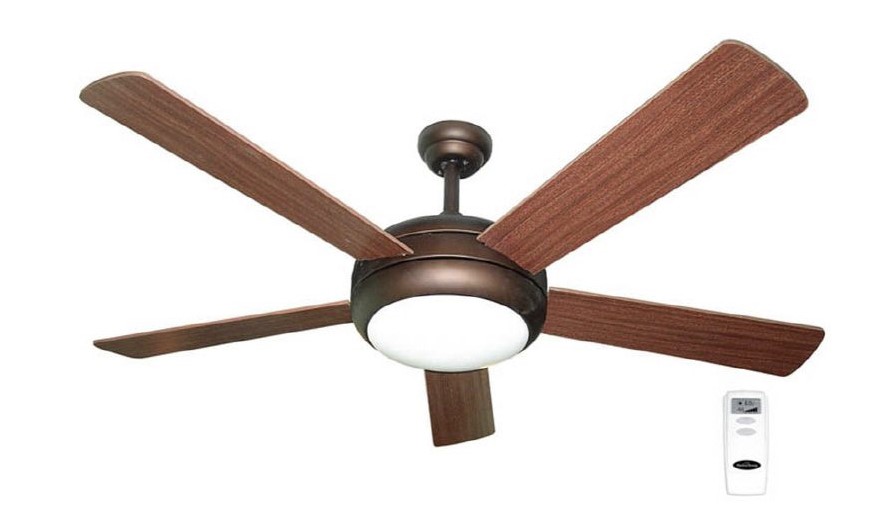 Living through hot weather during the hot season can be a challenge, especially if you don’t have an air conditioner. However, a ceiling fan can come in handy in helping to cool your home. That being said, since it runs on electricity, you will have to consider the energy bills that come from using it.

So, does running a ceiling fan use a lot of electricity? Most ceiling fans are rated at about 60 – 70 watts, but larger ones can go up to 100 watts. This means that a ceiling fan consumes about 0.06 to 0.1 kW per hour on average.

However, there is much more to ceiling fan electricity use than just wattage. How long you run it will determine whether your bill will be low, medium, or high. Below, we take a closer look at costs associated with running a ceiling fan, as well as tips on how you can keep them low.

What is the cost of running a ceiling fan?

Is it expensive to run a ceiling fan? As already stated above, the costs will come down to the ceiling fan you are using and the duration it runs. Below is a look at a typical ceiling fan energy consumption and cost per hour, day, and month.

To find out how much electricity your ceiling fan consumes, you need to first know its wattage rating. Take for example a Hunter indoor ceiling fan that is rated at 64 watts.

In one hour the fan will consume 64 watts. Since electricity energy is calculated in kilowatts, we divide the number by 1,000 getting 0.064 kW.

Now, for the cost of running the ceiling fan per hour, you need to find out the energy rates charged by your power provider. In the US, the average electricity rate is 13 cents per kilowatt-hour (kWh).

The cost of running your ceiling fan per hour is negligible. But what about per day? Now, this is where the costs will vary depending on usage. The longer hours you run the fan, the more it will cost.

But what if you decide to run the fan for 24 hours a day? The energy consumption will increase significantly,

Again the electricity consumption and costs per month and year will depend on the usage. When running your fan for about 8 hours per day every day, you can expect it to consume about 15.36 kWh (0.064*8*30). In terms of cost, this will amount to about $2.00.

Another thing to note is that ceiling fans with light will consume more energy than those without.

Tips on how to lower your ceiling fan energy bill

From the above calculations, it is clear that a ceiling fan does not use as much energy as some other home appliances. For example, comparing it with an air conditioning unit (500 to 3500 watts), the consumption is negligible.

That being said, an extra energy bill of about 6 dollars every month on just a single appliance can still add up. For this reason, below is a look at a few tips that can help ensure you keep your energy bills low while cooling your home with a ceiling fan.

1. Run the fan only when necessary

It is not necessary to run the fan for 24 hours. Therefore, you should switch it off when cooling is not needed. For example, when there is no one in the room or during cool hours (early morning and at night).

There different types of ceiling fans that are suited for different room sizes. Smaller ones (rated around 40 – 50 watts) are designed for small rooms. Medium size fans are rated at about 60 – 100 watts, while larger ones go between 100 up 200 watts.

Buying a large size fan when you only need it for a small or mid-sized room will mean that you are wasting too much energy.

3. Run your fan at lower speeds

Ceiling fans come with different speed levels, usually low, medium, and high. Instead of running it on high (where energy consumption is highest) you should run it on a low or medium level. You should only use the high-speed setting when the temperatures are too high.

A ceiling fan is a great accessory to have during the hot season. It can even be a great alternative to air conditioning units, which consume a lot of energy. However, running it, especially for long hours will consume quite a bit of electricity. However, with a few tricks, you can bring the costs down and still enjoy a cool home.