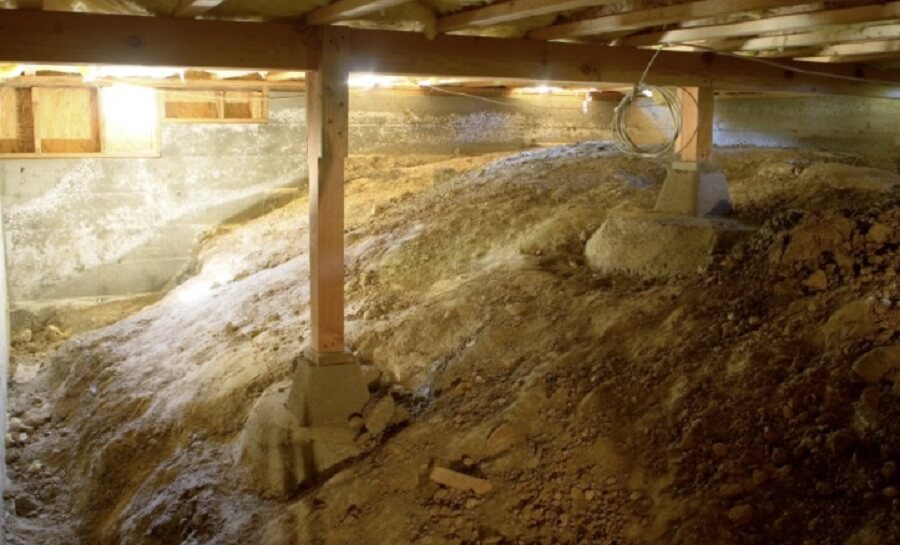 Getting rid of the terrible smell from your crawl space can be challenging. While the best way of eliminating the odor is to determine the cause, this can be hard to do in a crawl space.

If you want a natural solution to get rid of the musty smell in the crawlspace, you can apply a mix of vinegar and baking soda to the affected areas.

Is it normal for a crawl space to smell musty?

It is common for some crawl spaces to smell musty. However, the exact way that happens will vary based on whether you have sealed or vented the area.

In most cases, the primary reason for the stench is moisture. When warm and humid air passes through the crawl space, it comes into contact with a cold surface and condenses. After a while, the damp accumulates and forms mold, rot, and a musty smell.

5 ways to get rid of crawl space odors permanently

Ozone generators work by producing ozone gas which dissipates in the air to remove unpleasant smells caused by smoke, pets, musty basement, paint, among others. If you don’t have an ozone generator, consider getting the Enerzen 11,000mg.

Follow these steps to get rid of stenches in the crawl space using an ozone generator.

Before using the ozone generator, ensure nobody is at home because the gas produced is toxic.

Secondly, if moisture is the primary source of the smell, get rid of it first. It will cause the formation of mold and mildew, even after using an ozone generator. Understand that the more humid the environment, the less effective the ozone generator.

The best odor eliminators that are worth considering include Gonzo Odor Eliminator and Van Den Heuvels R86. They work by absorbing musty smells and moisture from surfaces without covering them up.

Here is how to use the Gonzo Odor Eliminator rocks:

If you do not prefer Gonzo Odor Eliminator, consider using Van Den Heuvels R86. It comes in the form of crystals, which you can use in wet or dry applications.

Here is how to use it:

If the room above the crawl space smells, the R86 will remove the stench through absorption without covering it up.

A crawl space dehumidifier works by removing moisture from the air. As a result, it helps to curb the growth of dust mites and mold.

A dehumidifier is useful if there is a build-up of humidity in the basement. When in operation, it will draw air over cold coils, condense out moisture, and then pass warm air over the area.

The best dehumidifiers for basement moisture is the Aprilaire 1820 Pro or the Waykar 2000 Sq. Ft dehumidifier, if you need a portable one.

Here is how to use it:

Place the dehumidifier in a way that allows air to flow in and out of the crawl space freely. We’ve also provided tips for running a humidifier longer without spending much on electricity.

A crawl space deodorizer bomb releases a mist or an ultrafine disinfectant fog into the air to destroy odors. The best products are the Odoban One Shot Fire or the Big D fogger 344. Here is how to use it:

You will have to wait at least one hour for the treatment to work.

Vinegar and baking soda offer a natural way of getting rid of odors from spaces. Here is how to use them:

Alternatively, use the two products separately. In this case, sprinkle the baking soda in the crawlspace and leave it for at least two days before cleaning the area.

You can get rid of crawl space odors in different ways. Some methods to consider include using a dehumidifier to eliminate moisture, ozone generator, or odor-eliminating crystals or rocks. If you want a natural crawl space odor neutralizer, use baking soda or vinegar.